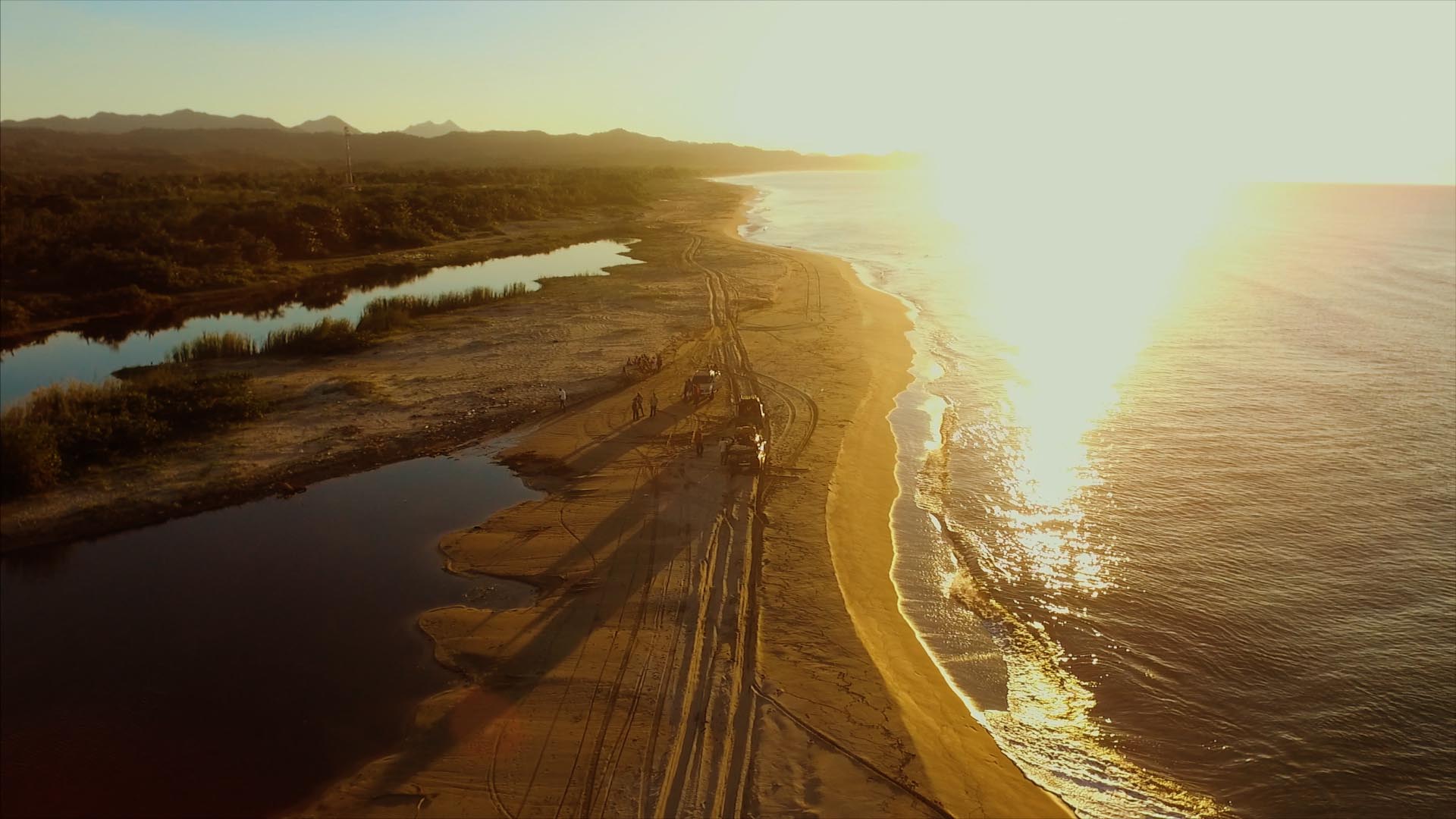 CAPTURING AERIALS FOR ‘LANDS TO DIE FOR’

By Armando Guerra We travel on very tight budgets. Often I am alone with Gerry and I need to be in charge of a several variables from audio, composition, lens choice, downloading and backing up to choreographing action and even Gerry’s shirts and pants. When we can afford to bring a second shooter we can become more creative. On this trip Gavin Northover, our DP, was crucial in capturing key moments while freeing me to use our drone. Finally. The drone. For me. Gavin would shoot BRoll. I would shoot aerials. And most importantly I didn’t crash it this time, like in the Ecuadorian Amazon. Or it wasn’t confiscated on entry, like last time in Peru. Most of the issues regarding the Garifunas are about their lands. Once considered places no one wanted –and where people would die of dengue–, their lands are now fantastic locations for developing tourism. So bringing a drone made sense for the documentary. We need to show their paradises, the locations that have made them a target of developers. And the isolated villages in the middle of nowhere, sought out by drug dealers building landing strips for their filled-to-brim-with-drugs small airplanes.

We used a Phantom 3 Standard. My heart is set on an Inspire, but where we usually go things can get out of hand and losing a 800-euro drone hurts less than losing its 3k cousin. In a way, I pay the price of using a less powerful Phantom: color grading. I struggle with the color science of the DJI’s cameras. For me it’s hard to match the resulting footage with the beautiful images out the Canon Cinema line. I am aware of the fact that if I used an inspire with a Zenmuse X5R it would be easier, but brings us back to the price tag again. My settings on the Phantom are simple: 1. For stills, I select JPEG and RAW, 16:9 for aspect ratio and a manual white balance, no style selected and for color D-log. 2. For video, I go with 2k so I can crop it later as we broadcast on HD, video format as a .mov file, PAL, and manual white balance. 3. Other little things: the histogram on the screen is very important. Never trust your iPhone or iPad. Another thingy: a grid, sometimes I use it and sometimes I don’t. I like my horizons straight and the grid helps when doing complex manoeuvres with strong winds. Actually, I only use it in a situation like that. 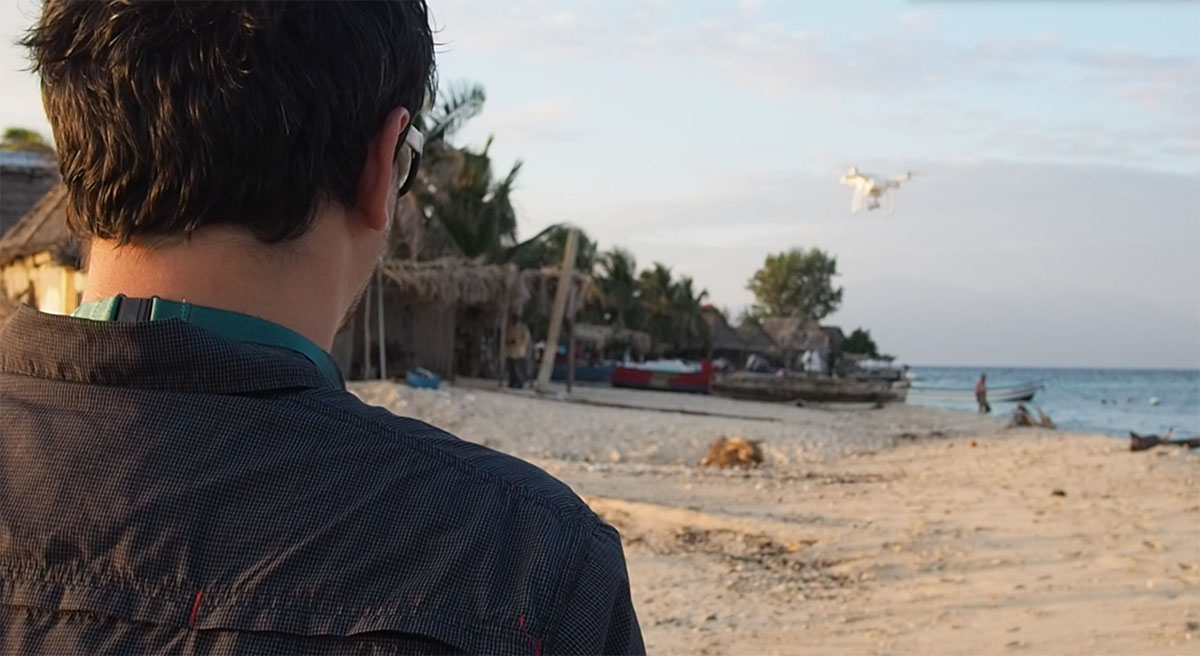 Yours truly flying the drone.

On this trip I remember a couple of moments in particular. The first, the maiden voyage. We had just arrived at a small island after a six-hour drive and then a one-hour ride on a boat. We had covered the Garifuna community meeting and done a few interviews. It was time to shoot some BRoll. I pulled out the Phantom out of the case, turned it on and wham, a warning on screen: DJI had released a firmware update and without it the drone wouldn’t fly. I had lugged that backpack across the world and we couldn’t use it. The basic island had of course no internet. I asked if there was an island with a working internet connection and two Garifuna boys took me on a boat to the main island where there was a natural reserve foundation. At their office I was turned away. The director said he needed to get a green light from his boss to let me use the internet. I pleaded “I’ve travelled so far and for so long”. He was not moved. Stonewalled by red tape, I crawled back to the boat and rode back to our island. But on the way I saw what seemed to be a dock in another island. “What is that over there”, I asked the boys. “That’s a hotel run by an American”. “Let’s go there”, I said. I needed to give it a last shot before giving up. We docked and I went straight to the bar. The owner was there and was very happy to let me use his internet. It took us an hour to do the full upgrade. The connection was pretty bad. He filled me in on the geography of the islands and the best places to go diving. I listened while posting photos to Instagram. The Internet addict I am. Once the upgrade was done, I did a quick test flight. All was in order. I brought the drone back to land it, but on the way down I crashed it into a tree branch. The Phantom fell right at my feet. My heart was racing. So much effort wasted. I kept my cool and checked the drone’s camera. It seemed to be ok. The helis were ok, too. I flew it again a few times. We were in business, but I’d run out of light. For that day at least. The second memorable moment of drone-flying took place in San Pedro Sula riding with the army. We had finished the interview with the base commander and had done one pass across a massive sugar cane field where gangs used to dump murdered people. Gavin started filming BRoll and I took out the drone. Our MO. This time we only had approximately half an hour to grab as much footage as possible. The commander needed to go, but he was kind enough to agree to do another pass through the fields and into the neighborhood once under gang control. We were on two patrol pickups. Gerry and the commander in front. Gavin and I behind. I had never flown a drone from a moving vehicle. It was slightly windy and there was an intermittent drizzle. The interview was still fresh on my mind. We needed plenty of footage of the cane fields and the houses where gangs tortured people, las casas locas, the crazy houses. The visuals were incredible, very epic. No wonder the gangs dumped bodies here. I started experimenting tilting up and down the camera to reveal the space. From Gerry and the commander to the fields. It worked. I lowered the drone and followed the commander’s pickup. It was difficult to film on a moving car on a bumpy, dirt road: watching the drone and the screen back and forth without a chance of getting a sense of the space proved a pain. After twenty minutes into it, I landed the drone and put a fresh card and a battery. This was the last flight before going home. I had the footage we needed so it was time to just fly the drone for extra material and play with it. If I crashed now, it wouldn’t really matter. We drove on streets following the commander’s car. At times I would go higher to avoid power and telephone lines. It was too crazy. There was traffic. People. Ten minutes of that and I decided that it was simply safer just to shoot aerials of the pickups going through that street maze. At the end, we didn’t use most of the neighborhood footage because it didn’t fit the story. The sugar cane fields aerials, though, did give a sense of an epic ride by the military, which was my original idea. And here’s the clip: