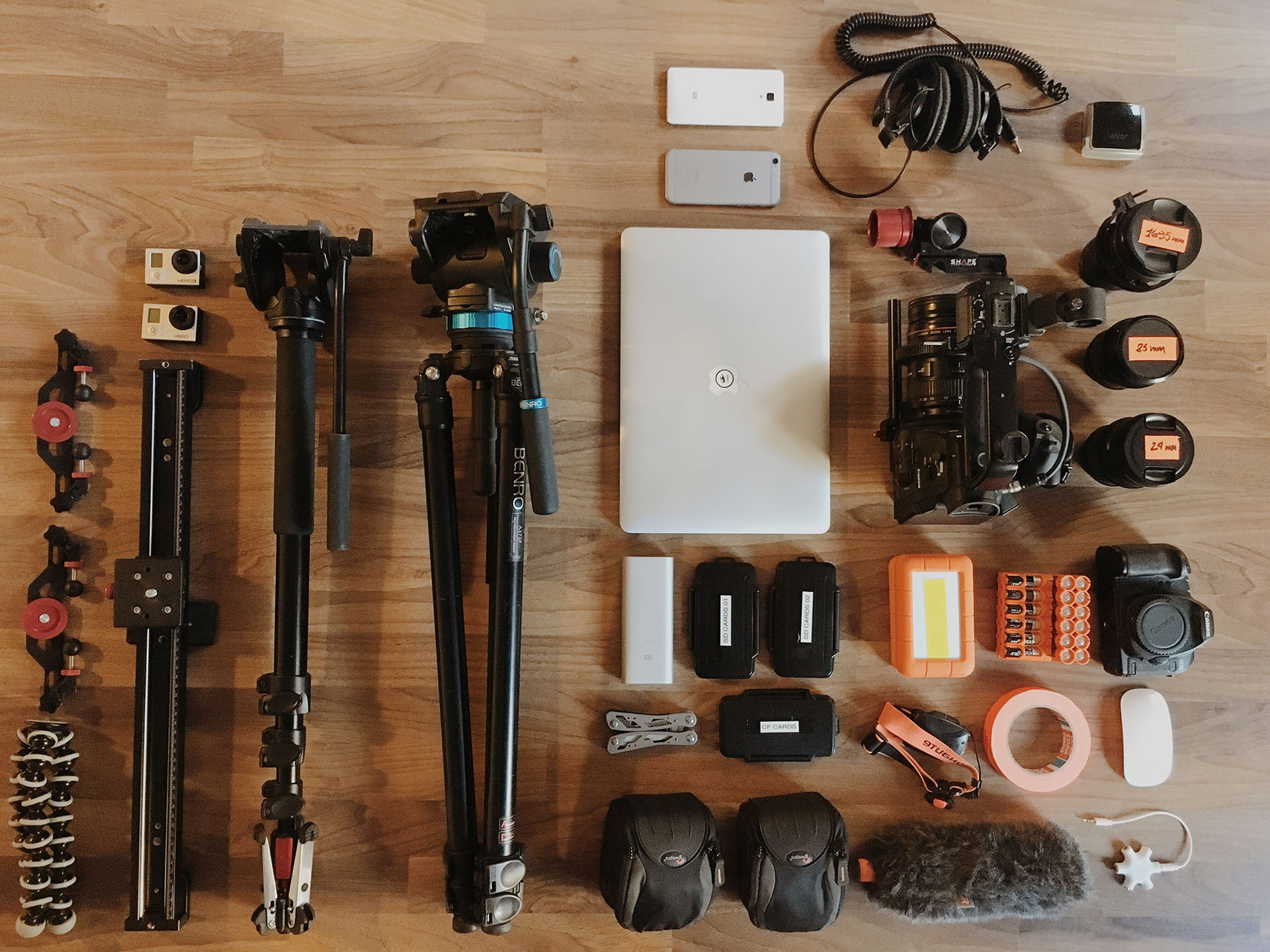 OF GEAR, MUSIC AND THE EVOLUTION OF A SEQUENCE

For ‘Time is Dust’ we wanted to go light with gear. Our original idea was to produce two short pieces in Peru: One on the illegal mining problem and another on the recovery of a fish species. However, once we saw how complex the mining story was we decided to focus on it completely. We knew we needed to ride in on motorcycles so it was imperative that we simplify and be selective with the equipment. Everything had to fit in one or two backpacks, included our clothes. Here’s a the breakdown, with some short comments. 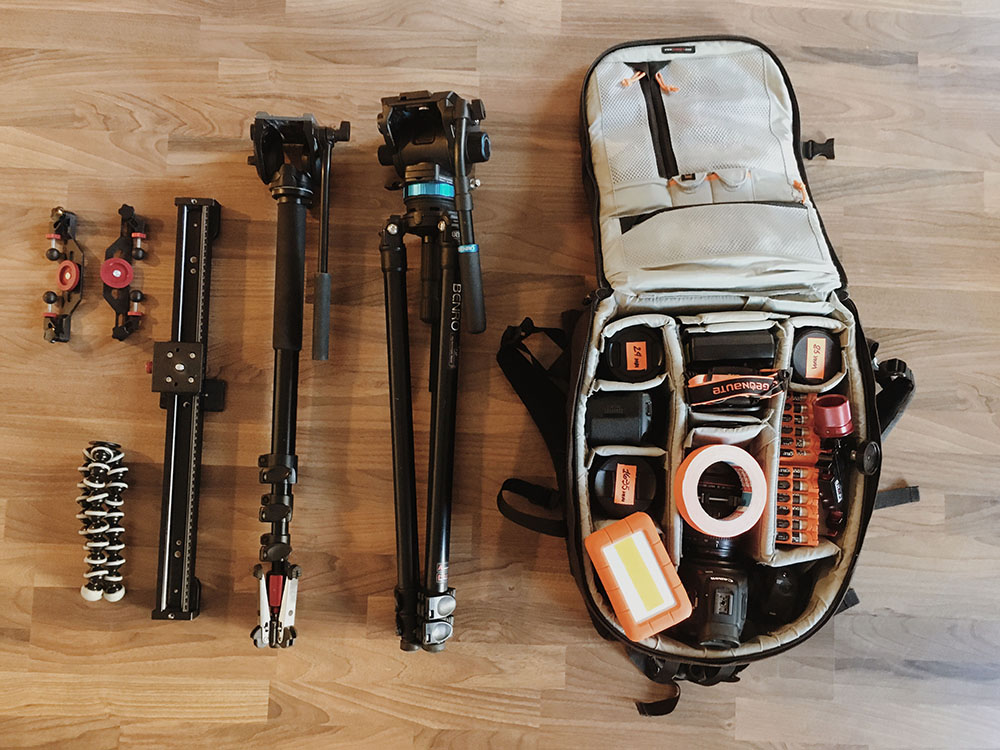 1. Main camera is a Canon C100 Mark I, on the Wide DR color profile. I went back to Cuzco and shot on C-Log, but most of the film is shot using the Wide DR profile.

3. SHAPE follow focus. I can’t recommend this enough. It does its function really well and it serves as a third stabilization point when I’m shooting from a monopod.

5. Rode NTG-4 shotgun with Rycote under and over covers.

7. Benro A373FBS8 tripod. The head’s not too good. We recently used a Manfrotto 504HD head on the Benro’s legs and I think I’ll be using that combination in the future.

8. D Rails C Series baseplate. You attach the SHAPE follow focus on this or a matte box if you have the time to be changing filters on the go.

10. Double A batteries. I usually carry 24 as a minimum, comfortably protected in two Storacell 12-pack caddies.

13. Duct tape. It always will be needed, even to leave a “do not touch” message on the laptop while you are backing up.

15. Multi headphone audio splitter. I always carry this for the occasion in which Gerry and I have to check an audio problem together. We’ve rarely used it, but I’ve left it in the bag.

16. Pelican SD and CF cases. I carry 24 SD cards for an 11-day trip so there are four backups of all the footage–two on the hard drives and two on the used cards. In the ultimate paranoia twist, Gerry and I take different flights back home, each carrying backups. He also lives in a different city.

17. Xiaomi power bank. This portable battery allows me to charge an iPhone up to 5 times, as well as other equipment such as a Kindle, a DJI remote controller, etc.

18. Stanley multipurpose tool. I lose them or get them confiscated often. I even got Gerry’s confiscated at the Cuzco airport and almost provoked an incident. Luckily, I produced a photo of a cat, blamed him and the authorities let me go.

19. Macbook Pro Retina, Mid 2014, 2,7GHz, 16Gb RAM, 500Gb. I usually travel with a Macbook Air because it’s light and does the download and backup job fairly well. I don’t remember why I took the Macbook Pro, but it’s likely that it was to edit something on the trip.

20. iPhone 6s with my Spanish number and a Xiaomi Mi 4 to use with a local SIM card. I use them both to shoot BTS pics and even film 4k video.

21. GoPros, we always carry them around with accessories and timers.

23. Joby Gorillapod tripods. I carry at least two of these on every trip. They are so so useful. I put LED lights on them and find all kinds of interesting places to light from, be it a branch, a door, a chair, you name it. 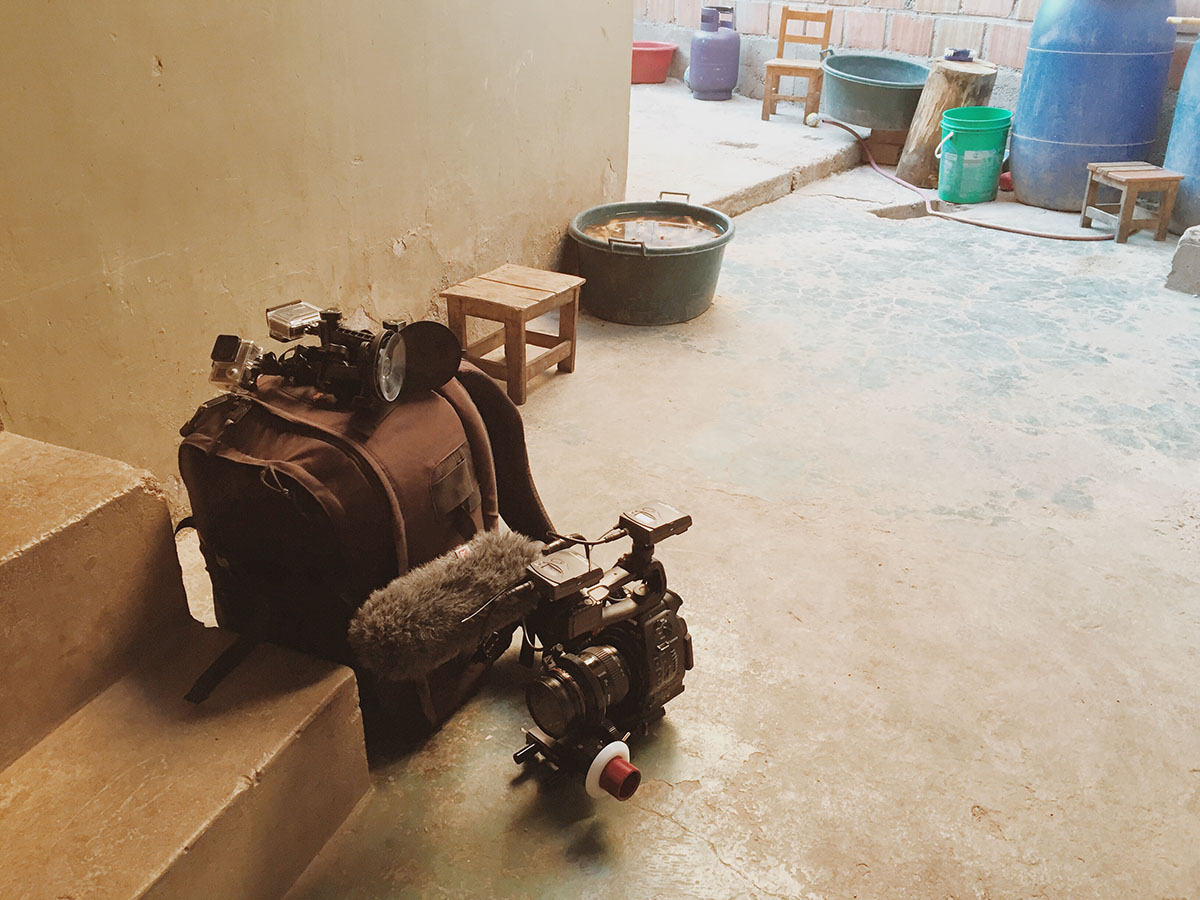 I tried to use the Gorillapods in the campfire scene where Gerry and Alberto are sitting together. I put the tripods on a branch and managed to attach a third to a metal tank. It was a great setup, but I hated how the LEDs were killing the magic of the fire so I decided against using artificial light and went grain-crazy with the flames. I also used them in Alberto’s hut to see at night. I wrapped one around one of the beams. The light started attracting all kinds of ugly-looking, chirping insects so I had to turn it off as the hut was becoming a Kafkaesque story. I did, however, manage to use a Gorillapod in the interview with the Environment Ministry specialist by the river. There was a boat on the shore near the interview location so I grabbed the tripod and secured it to a plank. Second camera ready. 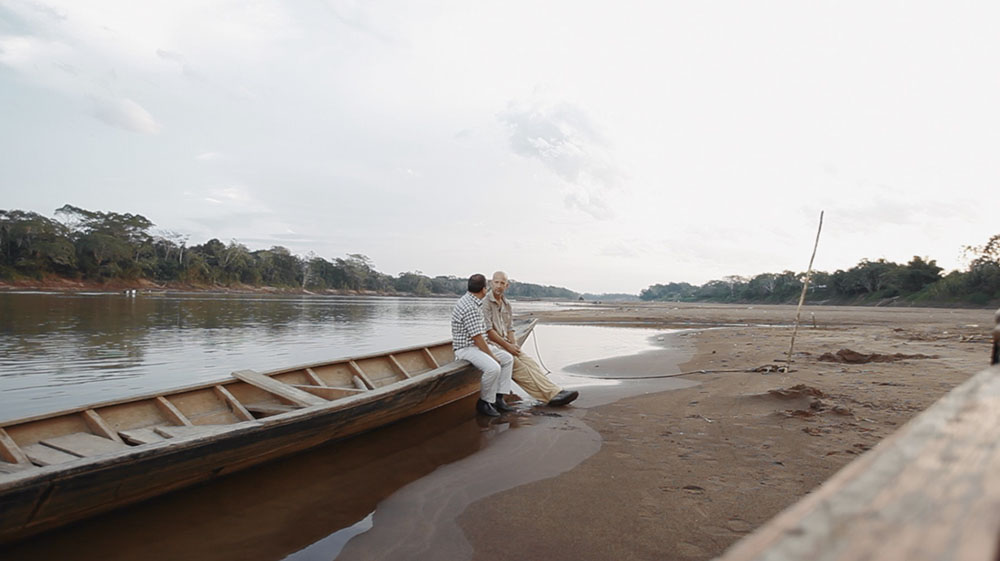 Here’s the angle from that position.
We wanted aerials so we took a DJI Phantom with us to Peru only to have it temporarily confiscated by Customs on entry. Getting it out would have taken two days, but we only had one day in Lima so we moved on. Once you step into La Pampa, the entry area to the mines, and start going into the buffer zone –the mines are supposed to be in buffer zone before reaching the actual protected natural reserve– you are met with destruction, desert and patches of scrawny jungle. The spectacle takes your breath. No Mad-Max movie can come closer. Walking on white sand where not long ago there was a jungle makes you question your own purpose on this planet. 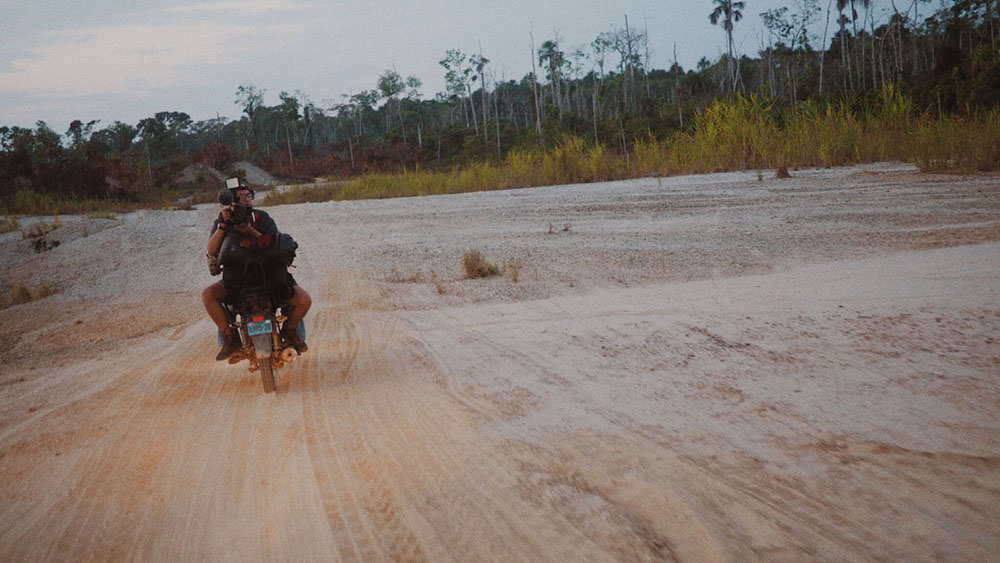 What a shame. The drone would have captured the immensity of the devastation from the air. We had imagined the shots, the movements, even the music! On the ground, the situation was not drone-friendly. We had to sneak into the camp at 3AM so that no one could see us go in. Once inside we realized we were surrounded by hundreds of other mines and hundreds and hundreds of people. There were drug and human traffickers in there, and thieves, murderers. If we had flown a drone in the mines, anything could have happened to us something unsavory could have happened to us. In the end Peruvian customs saved us from getting into trouble.

It took me a long time to assemble the music for the documentary. It may have been the single most timeconsuming part of the editing process. As CCTV uses a music library service we need to draw all the music cues from there. The challenge with longer pieces like Time is Dust is to make them sound and feel as if a single hand composed the score. At least that was my intention. 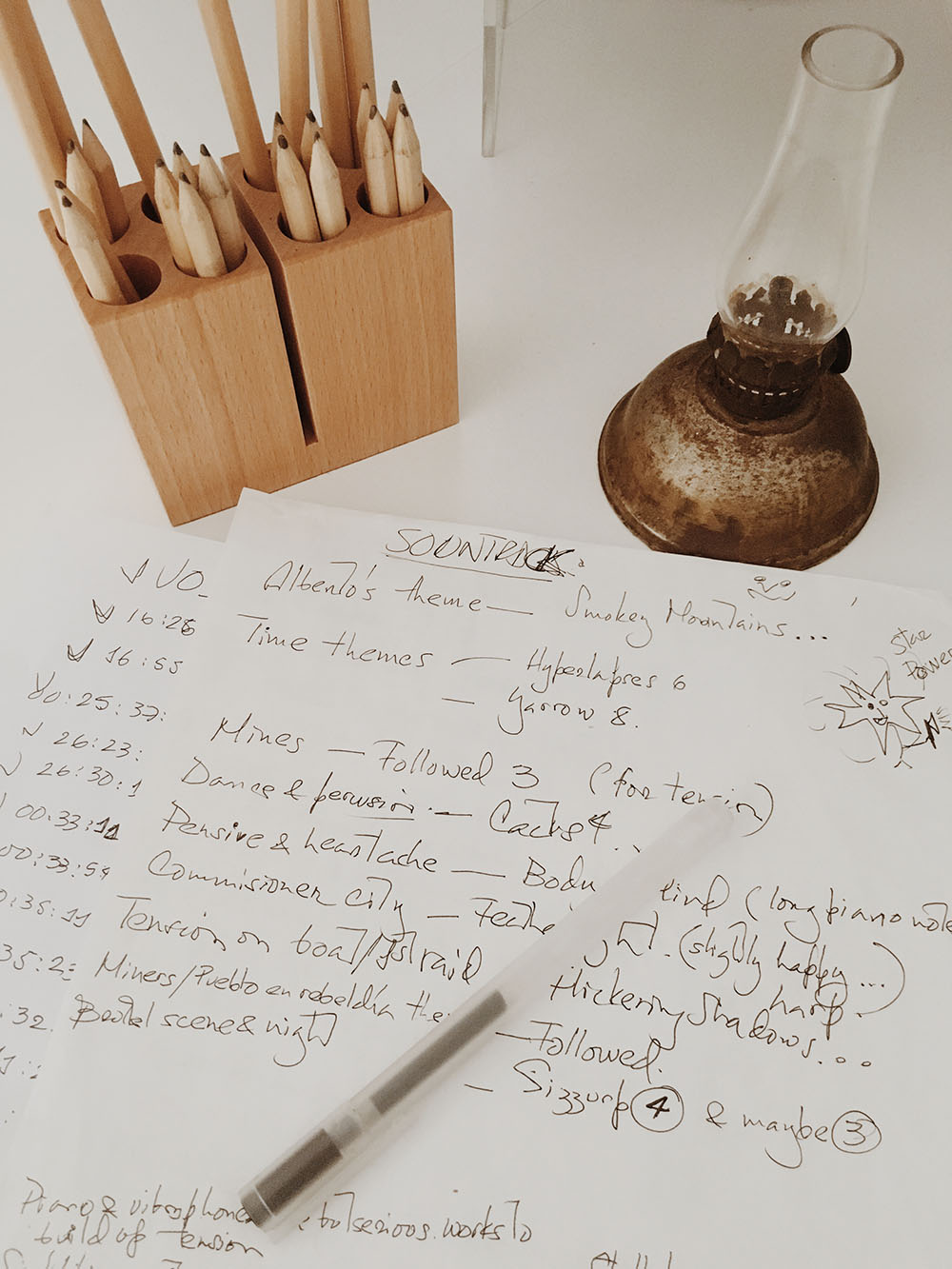 I needed to find three key elements: a theme for Alberto, a theme and variations for the mine, and a theme for the anti gold mining czar and his operations. I spent days looking for those three, but once I found them building the rest of the story musically was much faster and easier. For Alberto’s theme I wanted a subtle Andean touch to hint at his roots, but I did not want anything too ethnic or concrete for fear of choosing an incorrect element or leit motif out of ignorance. So a mandolin as an instrument seemed appropriate with a dronish, slow tempo, but not too ethereal. Alberto is a man who speaks calmly but firmly. He has both feet on the ground.
For the mines, I wanted tension and an allusion to a clock ticking, of time running out. The work there is brutal, day and night, and at any moment the military and the police may come and destroy everything. There’s also theft, murder and prostitution. Or getting buried in a landslide, which happens every now and then. And then there’s the mercury poisoning. For me musically the miners are sitting on a ticking bomb and their work puts the Amazon at even greater risk. Every patch of land that gets mined will take hundreds of years to recover. This has both national and international consequences. The music needed to reflect that situation of impending explosion. I settled for two themes slightly resembling one another. One is more obvious than the other: a ticking clock, long piano notes, pulsing synths and reversed effects.
The Commissioner’s theme was much easier to find then the others. The ideas in my mind were tension, some sort of background percussion with dark synths, repetitive to illustrate the chain of command typical in the military. I also wanted to convey a sense of the spectacle he was putting on for us; out of hundreds of illegal mining operations in the area he took out two that day… two out of hundreds! I also felt that the theme should not be overly martial because I wanted to bring the soldiers and the Commissioner down to earth, out of their Rambo characters. I got lucky and found one theme with a harp variation that suited my needs. I played it once with a rough cut and it worked. It could support the search part a la Rambo, but could bring out the harp to humanize these people as they faced up to the limitations of their operation.
THE EVOLUTION OF A SEQUENCE

Alberto is getting old and cannot work in the mines all the time. To stay afloat, he has bought a taxi motorcycle and drives around Puerto Maldonado. Gerry wanted to show this in the script, but I’d had huge technical problems shooting the sequence on a moving motorcycle. At the time I stopped the action and asked to start over, stopped it again, put a GoPro inside ALBERTO’s motorbike and started yet again. We were running out of light. It never felt right: the sound was not clean. The road was very bumpy, creating terrible shaking. I felt really insecure about it, but I didn’t stop the action a third time. Instead I asked Gerry to ask the same questions by a river shore without traffic. Alberto took us there and we finished the interview in a quiet environment. 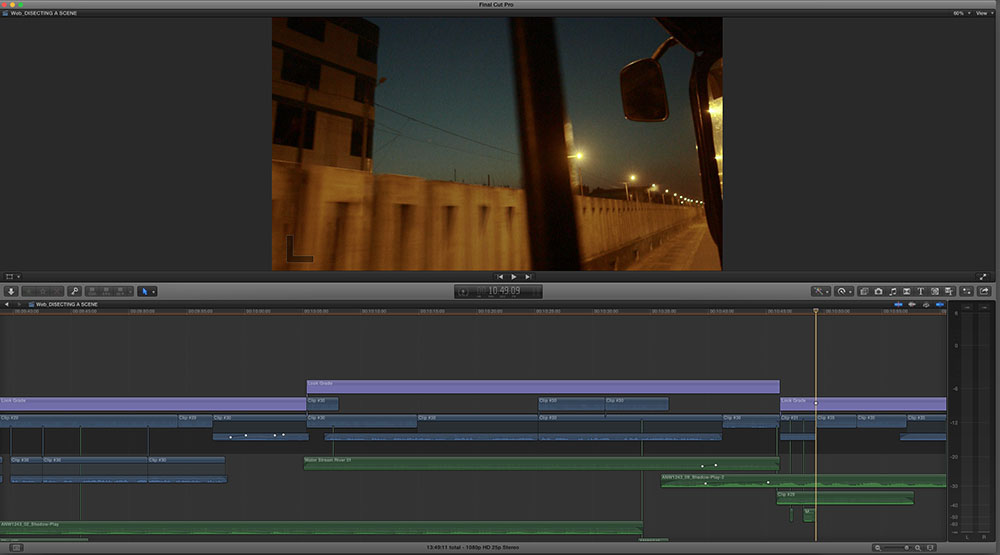 With the script in my hands, I sighed. Marta, my assistant editor, put together a very rough cut with exactly the same elements Gerry had included in the script. It was bad. As soon as I saw it I killed that motorcycle ride immediately out of technical considerations. The audio could be used, but it needed a lot of cleaning. However, it would then it not match with the rest of the interview. On top of that, the footage was shaky and some of my framing was simply plain weird. It had been a moment devoid of inspiration on my part. I fired myself.
Driving his taxi around was not so important in itself. Gerry could have mentioned it in VO as a last resort. We had a Skype call. Gerry really wanted the driving part in as the river scene would make no sense without it. We wanted that ride as a lead-in to the part in which Gerry asks Alberto if he knows the environmental consequences of his actions. That was the whole point of the sequence, I reminded myself. So I recut the sync and kept the essentials: Gerry’s question and Alberto’s reply. Gerry’s follow-up question and Alberto’s reply. Nothing else. I remembered having filmed Alberto driving us back to the hotel. It was getting dark, but there were beautiful red and blue shades in the sky. There were also a wall, neon lights, a main street with shops and white, energy-saving light bulbs. With those elements I could build a sequence with a circle-like structure: Alberto driving to the river, talking by the river and driving back home. Driving would open and close it. Alberto’s sync set the tone and conveniently so: this scene is sandwiched between a police and a military raid, both fast-paced and tense. At this moment the documentary needs a moment of pause. Alberto’s words serve both that purpose and at the same time reveal emotional information.
The taxi ride is a minor sequence within the documentary, but I like its mood, especially in his first version, which is longer. I had to trim it a bit in the final edit. Alberto himself set the tone, the tempo and the length of the shots. We feel that our main character is honest and puts forth his arguments, which we don’t often hear in the discussions about the destruction of the Amazon.